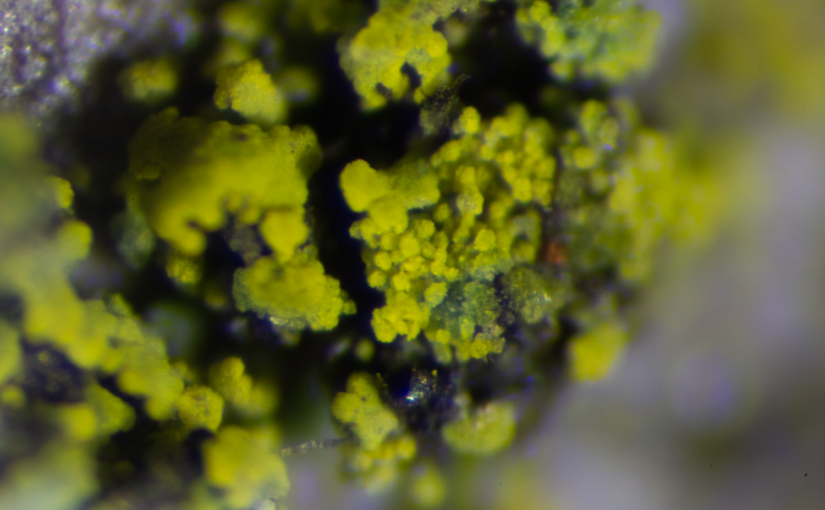 Many entities and processes exist on spatial scales that are not amenable to conventional time-lapse techniques. Lichen, for example, grow extremely slowly, on the order of a few mm to cm per year. This slow growth-rate makes it difficult to understand their dynamics except at punctuated points of observation. Additionally, lichen have extremely fine microstructures and are difficult to cultivate in the laboratory, meaning that in-situ observation is preferable.

At PIFcamp, the team will be prototyping a self-contained system for monitoring lichen over deeper times, both on Earth as well as while traveling in outer space. They will consider various aspects of the problem and develop a prototype for initial testing, considering materials that could be useful for extreme environments. All the outputs will be open-source as a way to develop new possibilities for deeper-time, in-situ and remote observation of organisms and processes that are otherwise diminished in scientific research.

The team will also be giving close attention to this symbiotic organism. Lichens exist throughout the entire biosphere and survive in the most extreme environments but are at the same time sensitive to environmental disturbances. They have also been shown to be resilient to the ravages of space and live for hundreds and sometimes thousands of years. At the venue, we will investigate lichen classification and morphology through investigating those entities that exist in the proximity of the Camp and will prepare a hybrid – remote presentation with Adriana Knouf (Amsterdam, Netherlands), the driving force behind the module and the Founding Facilitator of the tranxxeno lab, a nomadic artistic research laboratory that promotes entanglements amongst entities trans and xeno.

The project aims to research, develop and implement techniques that will transcend the real natural world into the digital unnatural realm.

The idea is to use the new techniques and tools to digitize the cultural or natural heritage that is near Pif camp, Soča valley, river canyons, or some artifacts from the WWI Isonzo front. To use photogrammetry to scan the object of desire and bring it to a digital environment and use it in the metaverse.

Miha Godec graduated in 2014 from the Academy of Arts of the University of Nova Gorica and the Portuguese school ESAD (College of Art and Design). In addition to his photographic and artistic practices, he is also a lecturer for photography and virtual reality, while he independently conducts regular educational, scientific, and artistic workshops. In his artistic practice Godec, who works at the intersection of art, science, and new technologies, focuses on the development of new media projects, in which he researches the consequences of anthropogenic impact on aquatic ecosystems, experimenting with water acquisition, purification and researching the sonification properties of water.

Gabriela Filipović studied physics and mathematics at the Faculty of natural sciences and mathematics in Maribor. Besides other diverse side-jobs, she worked as a freelance translator and tutor, as a sound technician, music arranger and DJ. Her work experiences include areas like project management in a company for manufacturing hydraulic lifting solutions and manual testing of mobile applications. In collaboration with KID KIBLA / KIBLA2LAB she is currently active in the field of cultural heritage preservation, specifically LIDAR scanning of objects.

Žiga Pavlovič (Ljubljana, 1987) is a programmer, maker, and promoter of new technologies. He studied in Maribor, Graz and the city of Tampere in Finland and still takes most of his knowledge away from online workshops. Most of his work is in the field of virtual, augmented and mixed reality, and since 2019 also in the field of interactive installations, in collaboration with the artist Valerie Wolf Gang. He already collaborated with KID Kibla in 2016 on the preparation of an AR-enriched book, and since 2020 he has been working with them again as a creative technologist and teacher in the media laboratory Kibla2LAB in the network of research centres of arts and culture – RUK and the digital heritage incubator in the E-DURI project. 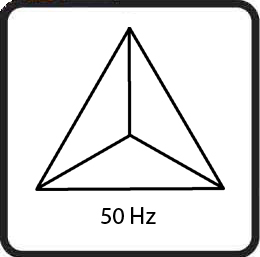 We all depend on it to a point where we don’t even notice it even exists.

Become a part of the cult, that worships three phased power transmission and join the droning hum of 50 cycles per second. Secrets on how not to kill yourself with mains voltage will be revealed. The 5 commandments of safety will protect you from the black magic that calls itself induction and lurks behind every power socket.

Text and photo by Bernhard Rasinger. 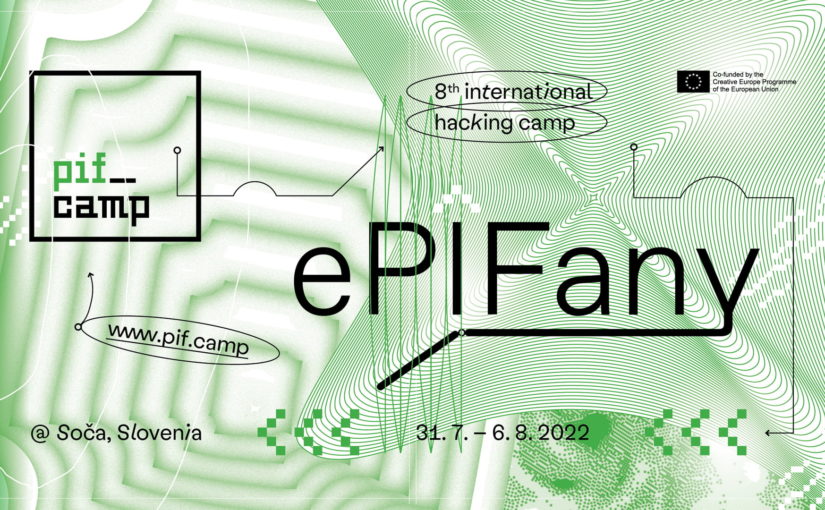 You can apply until the 7th of May! 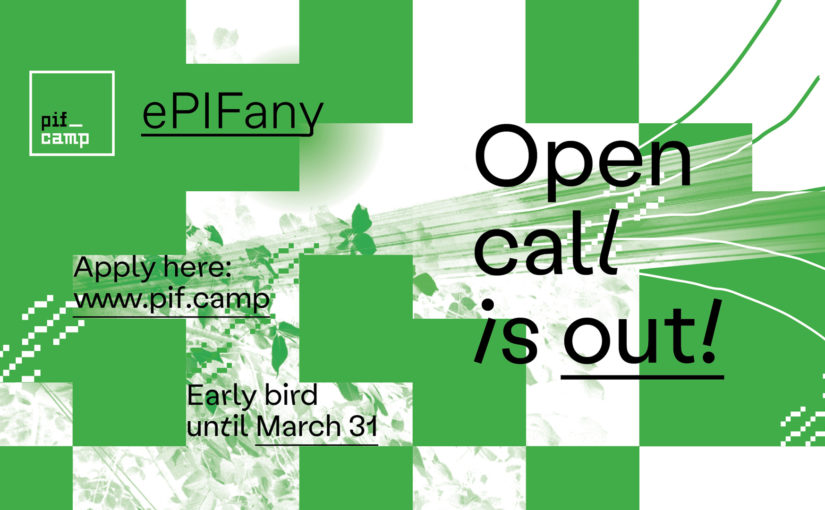 The open call for 8th PIFcamp is out! For more information on how to apply, participation fee and the application itself click here.

Make sure you apply by March 31, 2022 and catch the early bird registration! 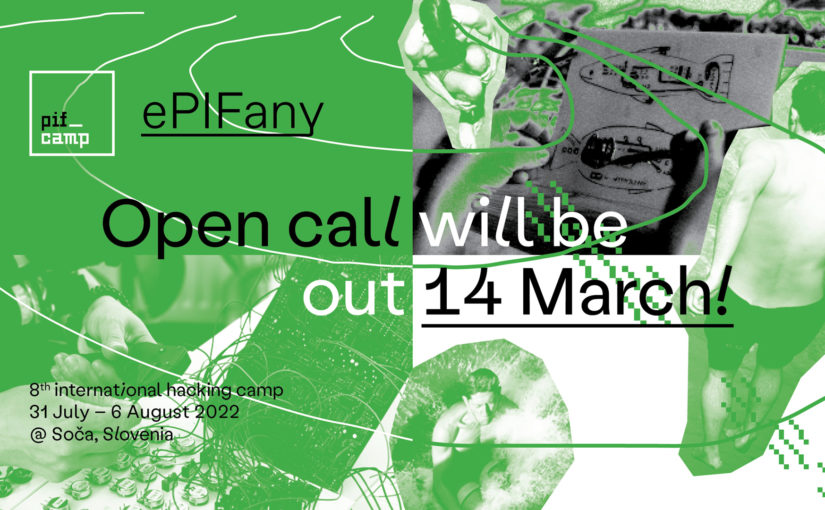 The 8th PIFcamp edition will be happening from July 31st until August 6th in the alpine Soča valley.
Open call will be out on March 14th! Stay tuned!

The last day at PIF started off with preparations for a busy evening full of project presentations, performances and… a farewell Milky Way themed party!

Some of the participants were racing to make the most of the day and to wrap up their projects or gather as much research materials as possible to continue their work after they return back to their labs and studios. Miha Godec for example spent the morning paddling in the Soča river, to acquire footage for his 360 degrees VR work.

Meanwhile, back in the camp, the others were cramming around the table where T-shirts and other garments were being decorated by this year’s PIF graphics.

For the whole week the cozy shadow of a nearby tree hosted a pop-up tattoo shop run by Leoni Voegelin, Rodolfo Costa Castro, Julian Jungel and Hannah Perner-Wilson that by now resulted in some very interesting personalized drawings proudly worn by quite many PIFcampers.

Now, the tree became a storytelling venue for yet another PIFcamp project, when Irene read her mycostories (stories she collected si far about how mushrooms influenced and changed people’s lives) to the gathered crowd.

Beepblip (Ida Hiršenfelder) who joined PIFcamp to embark on the expedition to the vast universe of retrofututrist sound has been building a complicated DIY analog synthMusic from Outer Space Sound Lab ULTIMATE since she arrived at Soča. On the last day, she was tucked away in her make-shift studio and focused on preparing the presentation of the work she has done over the week. Her’s was also the first presentation to launch the evening programme of performances that spanned three venues and was masterfully organized by Jacky.

Ida performed in the “DIY ambisonic dome” that is a continuation of last years project by Blaž Pavlica, who experimented with spatial sound synthesis and processing. This time Blaž worked with synthesis of the 3D sound fields and new sound effects possible in ambisonics format with the SuperCollider programming and livecoding environment. The dome, that was for this evening renamed as the “Shooting Stars from Mars” venue, hosted several performances of the last day’s programme.

The second venue was the basketball field behind the school where most of the participants have been staying for the past week. Under the red light of Janez Grošelj’s light installation, the performance of the Cracking Choir and a Robot Chicken Movie screening by Mónica Rikic and Anna Carreras happened but also spoken word performance by the tattoo crew, Voices of PIF field recordings by Heather, and an acupuncture hack performance by Stephanie and her son, accompanied by sound by Jacky Noise and visuals by Jurij. Later the basketball field served also as a stage for Jesus on Ecstasy and Toyota Vangelis.

Besides the “dome”, Bernhard set up his laser to once again create some stunning projections on a nearby tree, while Tilen and Matija played their sets.

When the bonfire slowly started to wane, the PIFcampers moved to the dancefloor to heat up the atmosphere. The dance turned into a small rave that crowned the conclusion of the seventh edition of PIF. We hope there are many more to come!

No excuse was good enough to avoid the traditional Friday mandatory hike to Velika Korita where PIFcampers are every year able to cool down in the (almost) ice-cold Soča river.

Upon returning and after enjoying a deserved lunch the PIF participants resumed the work on their projects, while several workshops were taking place around the camp, for example, a cat rescue workshop aka rope tree climbing and a workshop on the history of mutual aid and economic modelling, followed by two more workshops focused on MQTT and Wavey Wind motion controller.

While everybody was immersed in their activities, the art and crafts department formed spontaneously at one of the tables to create “the most beautiful PIFcamp schedules of the Saturday wrap-up program so far”, according to Tina.

The evening concluded with by now the usual jam session.

We entered the second half of the PIFcamp week with a strong FOMO feeling. The schedule was full of planned workshops already in the morning as if everybody feared there would not be enough time to finish all the work before the seventh edition of PIFcamp concludes. Only three days left…

So the activities started immediately after breakfast when Miha Godec invited the participants to join him in the tent which in the fore-noon sun slowly started turning into a sauna. The participants didn’t mind the heat though and were keen to follow the beginner’s guide to VR and 360 panorama videos. The workshop offered an overview of possibilities and tools and allowed everybody to try on the helmets and gain a first-person VR experience.

…while on the other side of the camp a kids-only workshop was taking place. Monica, Marta and Anna taught the PIFcamp’s youngest how to build their own CHICKEN ROBOTS! Look around you, the chicken robots are among us, and rumors are spreading they will soon show up again…

Right after lunch, Qianxun Chen held a workshop on textual seedling, that – unfortunately – had to be less practical than expected, due to server issues. Nonetheless, the idea of “growing” a digital plant in your browser, based on natural language associations, fascinated all the participating campers.

The meme specialist Maggie Kane continued with her etching party where participants got to etch their favorite memes on a PCB board.

After dinner, Stefanie presented a short lecture on ethical hardware, that focused on her experiences and challenges of working on the intersection of feminism and technology. Besides the issues related to gender inequality in the tech field that she and her colleagues are addressing with workshops and exhibitions at Mz* Baltazar’s Lab in Vienna, Stefanie’s lecture touched upon the questions of the ecological impact of technologies, as the materials these consist of, copper, for example, are tied to chains of ecological and social exploitation. “The future is that we look for substitutes for the materials and components that are not ethically sourced”, stressed Stefanie, while showing the interested PIFcrowd some examples of art projects that test out different, ecologically friendlier alternatives or make their works out of recycled materials. As an example of the latter, she pointed out a project by one of the PIFcamp-goers present, Irene Posch’s The Embroidered Computer that consists of (textile) relays, similar to early computers before the invention of semiconductors, and is solely built from a variety of metal threads, magnetic, glass and metal beads. The project is inspired by traditional crafting routines and patterns and explores the possibilities of re-using historic gold embroidery materials and knowledge to craft a programmable 8-bit computer.

The jam session involved even a larger group of participants this evening. Blaž Pavlica joined in as well with his live-coded visuals, and the party went on long after the bloggers went to bed.